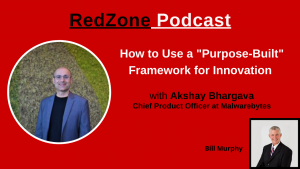 Akshay Bhargava is the Chief Product Officer at Malwarebytes. Malwarebytes is described as the leading advanced malware prevention and remediation solutions provider. In this role, he leads product organization, guides all Research and Development activities, and drives the company’s technology vision/product road map. He previously served as Vice President for Oracle’s Cloud Business Group, as a product executive at FireEye, and as a management consultant at McKinsey & Co.

Akshay is a board adviser to several tech startups and was named one of The Software Report’s Top 25 Software Product Executives of 2020. A proven thought leader, Akshay writes for Forbes Technology Council and is a frequent speaker at industry events. He holds a B.S. in Computer Science from Carnegie Mellon University and an MBA from MIT Sloan.

Some of the takeaways you will get from listening to this interview with Akshay are how to apply a purpose-built framework to product innovation. Akshay is using this for security innovation, but this is a framework that you can apply to any innovation. On LinkedIn, he has a really nice interaction with the CIO and CISO community about this innovation framework.

Also discussed is how to prioritize and choose what to do and what not to do with product development. We also talk about the mindfulness and Zen approach to security. There is research that is done that compares users that have been trained in mindfulness versus users who haven’t been. There is a stunning 38% decrease in hitting inadvertent malware.

END_OF_DOCUMENT_TOKEN_TO_BE_REPLACED

A great mentor is perhaps the biggest asset anyone can have when starting their professional career. These mentors can have profound and long-lasting impacts on the career journeys of mentees.

Lou describes one instance with his mentor, Kent, a servant leader, that stuck with him decades later. Lou says that in a meeting, Kent re-directed the attention from vendors away from himself and over to Lou.

We love this quote from Lou, “That deflection and self-confidence and promoting people visibly and empowering people has stayed with me my entire career. The way he respected people and his listening to his people were some of the greatest treasures I took with me over my journey.” 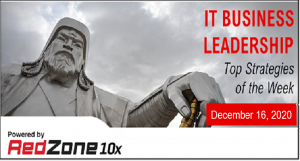 I love digging deep into the minds of IT Business Leaders. Here are a few thought-provoking offense and defense themes from the previous week.

1.    “How to use AppLocker to Block Malware… and it’s free!”- Roger Grimes, Data-Driven Defense Evangelist at KnowBe4, describes why you should be using application control software.

2.    “Re-Imagine What is Possible | Architect for Change and Agility.”-Lou Pellicori, Managing Director, CIO/CTO at Glenmede Trust Company, N.A., shares leadership insights from his over 35 years of managerial experience.

3.    “What’s the Average Length Malware is in your Company Before you Detect it?”-  Roger Grimes, Data-Driven Defense Evangelist at KnowBe4, on why malware dwell time should be given more attention.

4.    “DevOps + DevSecOps: Offense + Defense Innovation.”-Sean Mack, CIO & CISO of Wiley, discusses how he views his dual role as a privilege given how his organization looks to bridge the gap between technology and security.

5.    “How Long Will COVID Excuses Last for Poor Customer Service?”- Bill Murphy explains why businesses shouldn’t use COVID as an excuse for poor customer service. 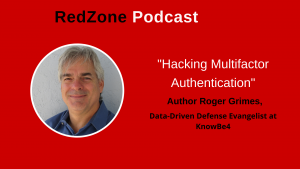 Roger Grimes‘  expertise in the field of computer security is unparalleled. He describes himself as the best in the world when it comes to computer security defense- and he has the credentials to back up this assertion.

He works with Kevin Mitnick who he calls the best Offensive Security guy in the world, but he calls himself the best when it comes to Defense.

With more than 40 computer certifications and twelve books authored or (Co-authored) on computer security, Roger has spent over three decades imparting his knowledge to audiences worldwide.

His current title is Data-Driven Defense Evangelist at KnowBe4. He is the author of the new book, Hacking Multifactor Authentication.

In this time of remote workforces and distributed endpoints, Roger advocates for Multi-Factor Authentication. However, MFA is not the end all be all for security. The vast majority of hacking doesn’t care about your MFA. It’s all about reducing your risk, according to Roger.

Throughout his many years in the industry, Roger a universal mission that drives all of his actions- to make the internet a safer place. Roger says if he leaves the Earth without accomplishing that feat, he has failed.

I also provide how you can connect with him on Linkedin. He has over 25k followers.

We’ve been sold by the industry that MFA is a Warm Blanky and Panacea for all security ills.

I’m excited to share this conversation with such a distinguished and world-renowned Security Defense Specialist.
END_OF_DOCUMENT_TOKEN_TO_BE_REPLACED 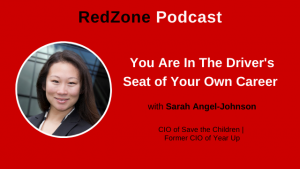 Sarah Angel-Johnson is the CIO at Year Up when this was recorded. She is now the CIO of Save The Children. She was named a 2020 Boston CIO ORBIE Award winner for Non-profit CIO of the Year. She has 20+ years of proven results in being a change agent at scale, starting with coding IBM’s first e-commerce website to digitizing the $860 million Girl Scout Cookie Program for 2.1 million girls and adults. She has led global organizations of 150 managers and employees, provided direction to 25,000 matrix team members, managed 7 global labs, and drove $1.7 billion in revenue.

Sarah has excelled when thrown into new situations and asked to lead change within an organization. She realized early on in her career that she could step in and meld different people, processes, and content together in a way that most leaders couldn’t.

As a leader, the question of how do I bring people together is an important one. Sarah and I answer this question, share stories, and discuss qualities that are important for a leader to have and how to connect with employees at a deeper level.

It’s not enough to simply ask questions. What separates good from great leaders is fundamentally leading with inquiry. Asking open-ended questions, having a genuine interest and curiosity in what motivates people, and having the patience to see everything through are necessary when bringing people together to take action.

In my conversation with Sarah, you will hear how every step in her career has contributed to her overall success and shaped her leadership style. But no matter where her career has taken her, one thing remains the same- a desire to make an impact and help others at scale.

I’m excited for you to hear her story. Let’s take a listen.
END_OF_DOCUMENT_TOKEN_TO_BE_REPLACED